The Rutherford Trail provides an excellent hiking and snowshoeing route from Georgetown up to Silver Dale, where it connects to the Sporting Times Trail. The relatively steep trail runs adjacent to the South Clear Creek and is most appropriate for hiking and snowshoeing due to its construction. The trail begins through a gate and up a dirt road past a water tower and water facility along the creek. A kiosk sign at the bottom provides a map and other information, QR code signs along the way mark historic locations. The Trail changes from dirt road to narrow singletrack across the last bridge, about 0.3 miles up, where it continues to climb uphill along the creek until ending into the Sporting Times trail in Silver Dale. Several sections now have steps and wooden bridges, lifting the trail out of low lying areas. 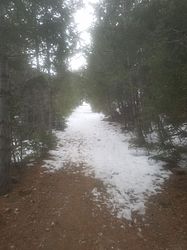 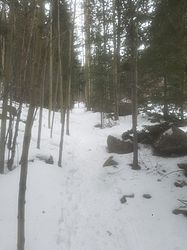 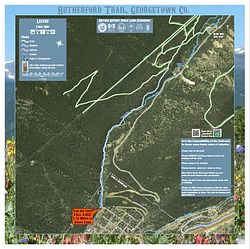 In 1873 California Naturalist John Muir wrote to his sister: “The mountains are calling and I must go.” Certainly the call of nature was ever-present for those living in Georgetown, as illustrated by these ladies and their children who had just ridden up the narrow, sometimes steep road from Georgetown up to Green Lake. 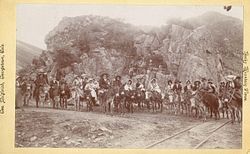 Two large creeks run through Georgetown: the South Branch of Clear Creek on the west side of town, and the South Branch of the South Branch of Clear Creek, which runs along the edge of the Rutherford Trail. The town’s first water plant was built just below today’s plant, in the vicinity of the large water tower (see photo above). The first water company was a private operation, Clear Creek Water Company, formed in 1874. Local businessman A. R. Forbes was the President. In later years Mr. Forbes recalled that he started the company immediately after hearing of the major fire in Central City in 1874. The company’s stockholders built a reservoir and began construction of water mains throughout the densely built commercial district. Once completed, the town was able to purchase hose carts for two newly formed fire companies: Hope Hose No. 1 an Alpine Hose No. 2. Access to pressurized water and fast response by firemen running hose to hook up to fire hydrants kept the town from burning to the ground. 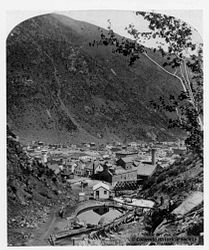 Today’s Rutherford trail starts up the route first planned by the developers of the Georgetown and Chicago Lake Wagon road, a toll road designed in 1872 to cross the range to the east and end up near Edith Lake near the head of today’s West Chicago Lakes trail. Early trail builders filed papers with the county and territorial offices, using plats which were vague, to say the least. The county would regulate the amount charged in tolls, while making sure that the companies regulating the roads maintained their trails as needed. The Georgetown Chicago Lakes trail was completed through the general area around Silver Dale, but was never completed over the top. In 1874 a new route was developed to the southwest from the Georgetown Chicago Lakes road up to what is now Guanella Pass. The Leavenworth Branch road would end up being more popular than the earlier Georgetown Chicago Lakes. 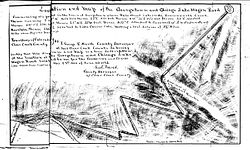 It is hard to imagine that wagons pulled by 4 horses or more could wind their way up these old trails. There certainly wasn’t room to pass. Generally people going up headed out in the morning, while those headed back down waited for the afternoon. In later years portions of this steep road would be driven by automobiles which would have to back up the steepest sections since they didn’t have fuel injection, and the gasoline would not flow up to the front of the car where the engine was housed. 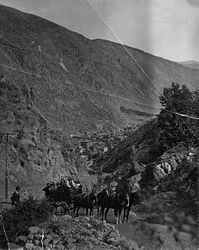 The Leavenworth Branch Road was contructed in 1874 as a Y off of the earlier Georgetown Chicago Lake Road. People traveling to the mines in Upper Silver Dale or East Argentine (the area around today’s Waldorf) would turn off at this point.

If you wander around the flats to the east of the dam, you will come across several large concrete foundations, remnants of a mill built in the early 20th century. The large mine dumps and mill tailings mentioned in the previous photo, had been created at a time when the processing of ore was rudimentary at best. This new mill was built to re-process the ores of the Colorado Central mines. At the same time, the war in Europe, soon to be known as World War I, would create new markets for trace minerals such as zinc, copper and lead, all of which were present in the mines around Silver Dale. Construction of the mill was started in 1917, and completed in 1918. While hailed as a great boon for Georgetown’s economy, the company would soon go bankrupt, and the mill would be torn down. Equipment would be sold to other mining companies in an effort to pay off bills, and employee wages.

Growth of trees through the years makes it difficult to recreate this view, however, the photo was taken above the dam of the forebay reservoir, looking southwest. The large mine dump in the center of the photo is from the Marshall tunnel and the workings of the Colorado Central mines. Just below, the open area with a smaller amount of tailings is the general vicinity of the parking lot just to the east of the Guanella Pass road. The mines of Leavenworth mountain were exceptionally rich, and mostly owned by local mining interests. Mines in many other parts of the county were owned by investors from the east coast or overseas. 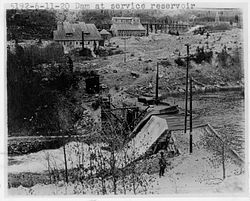 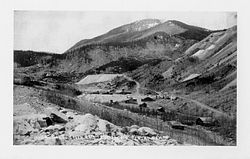 You can read more about the site in this local 1918 article: https://www.co.clear-creek.co.us/DocumentCenter/View/7827

Here are the concrete foundations of the final mill site. 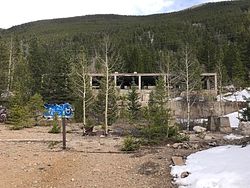 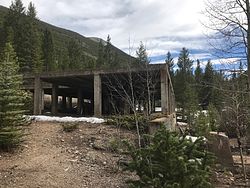 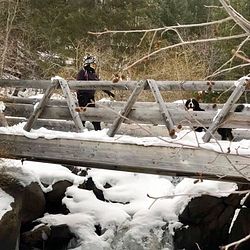